> Blog > Ethnic decoration & crafts of the world. > The Three Monkeys of Wisdom: Origin and Meaning

The Three Monkeys of Wisdom: Origin and Meaning 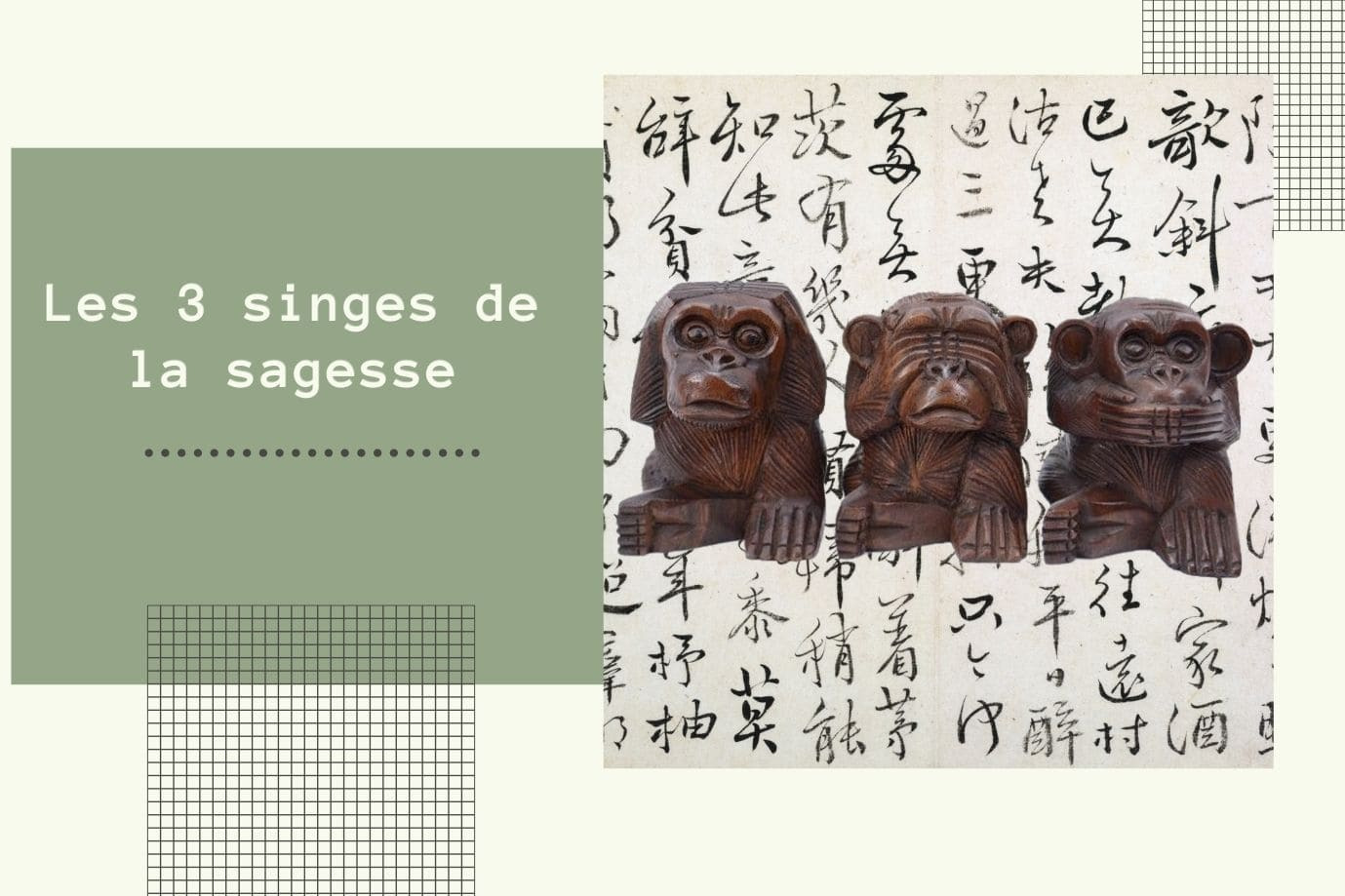 Learning to defeat evil: the symbolism of the three monkeys of wisdom

The first hides his eyes, the second the mouth and the third the ears. You must have already seen these three monkeys with strange postures adorning parchments or decorative objects.

But where do they come from and what is their meaning? Follow the guide, Coco Papaya takes you to discover these three mystical monkeys who bring strength and wisdom.

The origins of the 3 monkeys of wisdom

It is difficult to estimate the exact origin of these three wise monkeys.

It was a monk named Xuanzang, one of the most important Chinese translators, who introduced their appearance into Buddhism in the seventh century. According to legend, this monk was always accompanied by a monkey during his travels, especially when he left China to explore India in search of new Buddhist texts to translate. Although it was not he who invented this figure of the three mystical apes, he introduced them to China and helped popularize them.

The first trace of their existence is linked to a very famous Chinese thinker of the fifth century, a certain Confucius, in his book "Analects (Interviews) of Confucius". A maxim that was reinterpreted centuries later by the German philosopher Nietzsche with his quote "When your gaze penetrates for a long time into the bottom of an abyss, the abyss also penetrates into you", implying that when we are confronted with evil, evil can also take hold of us.

Another legend would assume that these three monkeys are descended from the Japanese Koshin belief. The latter would be based on the idea that each human would have a part of evil represented by three evil "worms" called the "Sanshis".

Every sixty days, the Sanshis leave our bodies to repent of their evil deeds to a higher deity called Ten-Tei. The latter would punish humans by shortening their lives according to the severity of their misdeeds. It is by adopting a good behavior, similar to that of the three mystical monkeys, that one could avoid punishments.

If the origin of this metaphor is more Chinese, the use of the three little monkeys in decoration is the idea of a Japanese sculptor, Hidari Jingoro, who adorned the temples of Nikko in Japan in the sixteenth century.

The meaning of the three monkeys

The three monkeys are called the "Sanzaru". In Japanese, "san" means three and "saru" monkey. Over time, the saru becomes zaru hence the name. Moreover, zaru also brings a negative form, which is why we can interpret the symbolism of the three monkeys as "not seeing, not hearing and not speaking".

If we take the first symbolism of the three mystical apes, it would mean "seeing nothing, hearing nothing and saying nothing". But wouldn't that be a bit too simplistic?

According to the Koshin cult, the three monkeys could mean "not wanting to see what could be a problem, not wanting to say anything about what you know so as not to take a risk and not want to hear so that you can act as if you don't know".

Another Buddhist approach includes the idea of evil: "not seeing evil, not hearing evil and not saying bad things." It's as if every time we witness something bad or hear something bad, our body can absorb it like a sponge.

These three little monkeys would therefore be a call to refuse perversity, and to ignore the wrongful conduct of others rather than denounce it, as if we were aware of everything around us, but we chose not to let ourselves be reached.

The story of the fourth monkey

Yes, we sometimes see statues with 4 monkeys, but the 4th came much later in the equation.

This fourth monkey, called Shizaru, is more often depicted crossing its arms or covering its crotch to indicate that it is abstinent. In the Buddhist tradition, this means that one should not do harm and not be distracted by trivial, often intimate, thoughts.

The 3 monkeys of wisdom on a daily basis, and in decoration

A strong symbol, the three monkeys of wisdom contain a perfect symbolism to infuse positive energy into your interior.

See the decorative objects representing the 3 monkeys of wisdom.

It is also said that Gandhi, known for his daily life devoid of superficiality, made a single materialist exception by keeping near him a small statue of these three monkeys.

So do as he did and opt for an inspiring decoration with wooden, bronze or stone statuettes to bring a Zen touch to your living room or bedroom. Surround the three primates with a few plants, or a small Japanese garden: the change of scenery is guaranteed!

For the absolute fans of these three little monkeys, there are even fashion accessories: we fall for the pines, which are perfect to give a fashion touch to a denim jacket! To try them is to adopt them!

Are you sensitive to the metaphor of the three monkeys of wisdom? Or is it rather their adorable boils that make you crack?

Whether your choice is philosophical or purely aesthetic, remember that these three little macaques from Japan can be perfect guardians to be better on a daily basis, and remind us that all our choices have consequences for others.