The catalysis lamp: what is it, how to use it and how to choose it?

Coco Papaya expands its range of room fragrances and now welcomes a new type of scent diffuser in its collection: the catalysis lamp, also known as a catalytic lamp.

Here we will see how the catalysis lamp works, how to use it to deodorize, sanitize and perfume your living space...

The catalysis lamp: what is it, how to use it and how to choose it?

Coco Papaya expands its range of room fragrances and now welcomes a new type of scent diffuser in its collection: the catalysis lamp, also known as a catalytic lamp.

Here we will see how the catalysis lamp works, how to use it to deodorize, sanitize and perfume your living space, but also how to take care of it so that it continues to diffuse its fragrances for many years.

To begin with, let's review the essential features of the catalysis lamp...

The catalysis lamp or catalytic lamp: what exactly is it?

The catalysis lamp was invented in the late 19th century by Maurice Berger, the founder of the famous Berger © lamps. Due to its efficiency, it has been a great success and other manufacturers now offer catalysis lamps, such as the English brand Ashleigh & Burwood London, for example.

It is most often in the form of an elegant bottle resembling a small vase, closed by a decorative cap.

Initially, it was mainly used in hospitals and other medical facilities to sanitize, disinfect and deodorize the ambient air.

But its use has changed with the times and is now found mainly in homes, where it is used as a decorative object as well as as a diffuser of room fragrance.

The operation of the catalysis lamp is simple, but extremely effective : the lamp is equipped at its top with a catalytic burner in gray stone that absorbs the liquid perfume thanks to a wick. When the burner is lit with a lighter or match, it ignites. This flame must be extinguished after 2 minutes by the user.

Then begins a flameless combustion that attracts and destroys the molecules responsible for bad odors by a phenomenon called "catalytic oxidation".

The catalytic burner also allows the effective diffusion of the perfume contained in the lamp, in an entire living room, up to about 30m2.

The main advantage of the catalytic lamp therefore lies in its double action :

Do you like the idea, but want to know more?

So now let's see how to use the catalysis lamp. First look at the diagram below which shows the different components of the lamp. 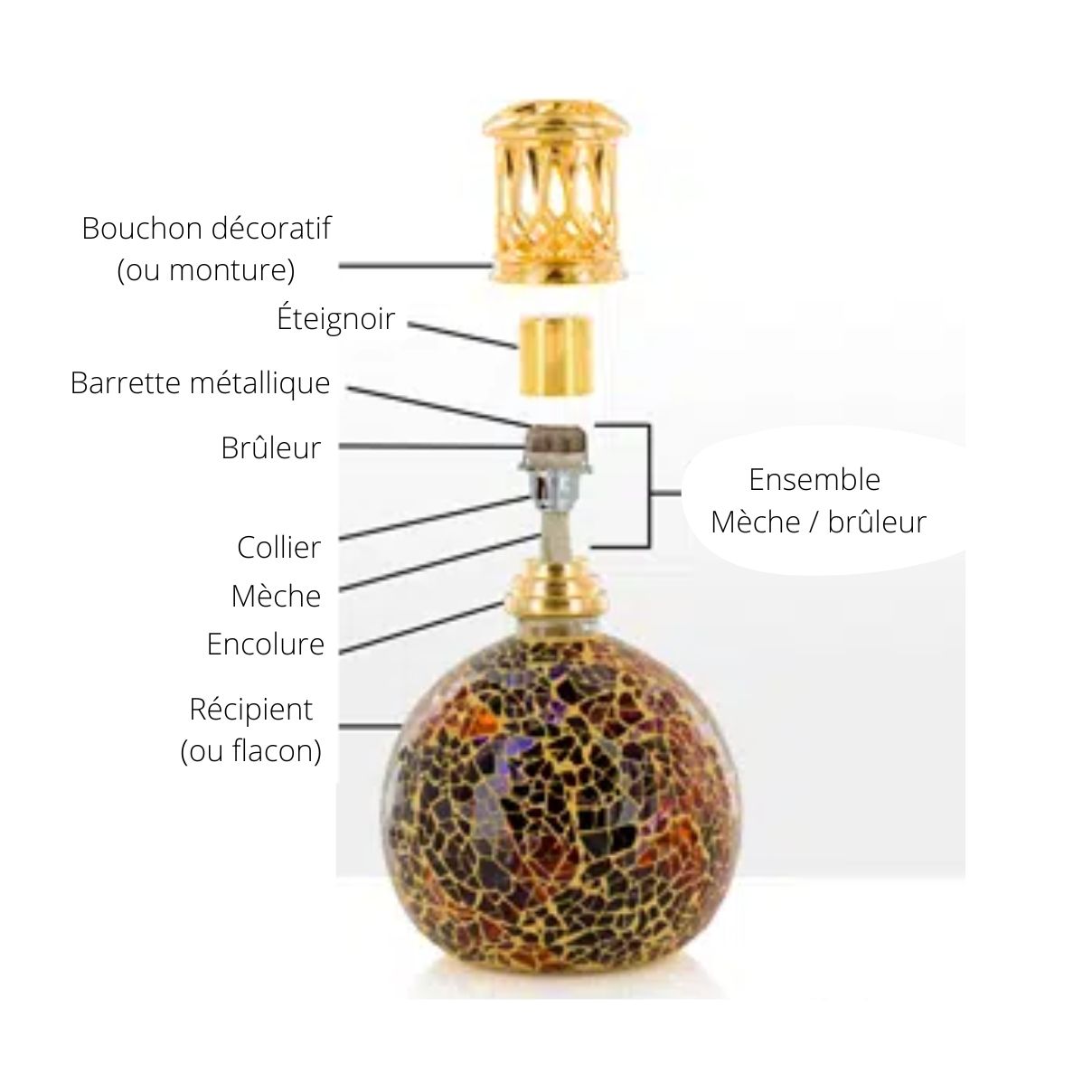 How to use a catalytic lamp?

Unpleasant smells have taken possession of one of the rooms of your living space? Do you like to spread a pleasant scent while you work or listen to music?

There is no shortage of opportunities to use a catalysis lamp, and you never get tired of this wonderful scented bottle! So here's how, in 9 simple steps, to use a catalytic lamp for the first time :

the wick absorbs the liquid fragrance and leads it to the burner. Note that if your catalysis lamp has already been used and still contained liquid fragrance and a wick in good condition, the previous steps can be skipped (start in step 7.). Now you can turn on the lamp: remove the extinguisher and turn on the burner with a lighter or match. Let the flame burn for 2 minutes, then extinguish it by blowing on it. Replace the decorative cap (without extinguishing it): it protects against a possible burn because the catalytic burner is very hot! The catalysis lamp is now in action. Let it run like this for a maximum of 20 minutes to perfume a surface of 10 m2. (To perfume a room of 20m2, you can therefore let the lamp work for up to 40 minutes). When the room is sufficiently deodorized and scented, remove the decorative cap (be careful, it may be hot!) and put the extinguisher back in place on the burner. Your catalysis lamp is now off but the pleasant scents it has diffused will remain noticeable for a long time to come!

While you are enjoying the fragrances, it is good to remember some precautions when using the catalysis lamp:

And to change the perfume?

You regularly use your catalytic lamp and now want to change the fragrance. But how can we prevent the old perfume and the new one from mixing?

It's very simple: just remove the wick /burner assembly and let it air dry for about 30 to 45 minutes. The old perfume will evaporate and thus leave room for the next one!

There are also "neutralizing" refills for catalytic lamps. They are used as perfume refills but are odorless and only serve to erase all traces of perfumes previously used in the lamp. These "neutral" refills are effective but have a cost, while the method described below is free. For this reason, we do not consider neutral refills to be essential.

How to take care of a catalytic lamp?

The catalysis lamp is a very simple maintenance device. Only the wick + burner assembly needs to be periodically replaced and it does not cost much.

The other components of the catalysis lamp require no maintenance and have a virtually unlimited service life.

When to change the wick of your catalysis lamp?

The wick and burner of the catalysis lamp must be changed at the same time. Most manufacturers of catalytic lamps recommend changing the burner + wick assembly about 1 time a year , or after 200 ignitions.

The burner of my catalysis lamp is all black! How to clean it?

Do not panic, this phenomenon is normal! This is due to the burning of the perfume. To clean the burner so that it returns to its original color, simply turn on your catalysis lamp, as you usually do.

Check that it contains perfume, then turn on the burner. In order for it to regain its gray color, you may need to leave it inflamed a little longer than the usual 2 minutes recommended. You will see its color gradually change through the flame. Above all, do not leave it inflamed for more than 6 minutes. If after 6 minutes it has still not turned gray again, then this is a sign that it will soon have to be changed.

How long does a catalytic lamp perfume refill take?

According to data from reference manufacturers, a 250ml liquid perfume refill allows about 10 hours of combustion.

We have seen previously that to sanitize and perfume a room of 10m2, it is necessary to operate the catalysis lamp for a maximum of 20 minutes. After calculation, we deduce that the bottle of 250ml will allow us to perfume this room of 10m2 for 30 days at the rate of a session of 20 minutes per day.

To summarize, let's say that a refill of 250ml corresponds to at least 1 month of daily use of the lamp in a room of about 10 m2.

And that's it, you know everything there is to know about catalytic lamps, their use, and their virtues.

Do you have a question? Need more information? Do not hesitate to contact us and we will answer you with joy!